Car Accidents: What information should I collect immediately after a car accident? 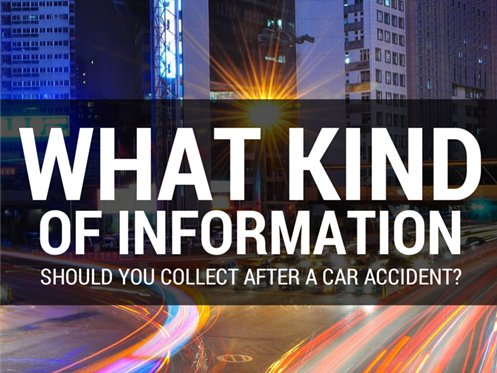 Immediately following a car accident, you want to preserve as much information and evidence as possible.

The most information you can get, the better off you'll be.

The best thing you can do is protect your rights. You need to make sure you've covered all of your bases in order to truly get the justice you deserve after you've been involved in a car accident.

Below is a list on what you should do immediately following a car accident. Following these steps will help you in your claim. Get the facts. Stop guessing. 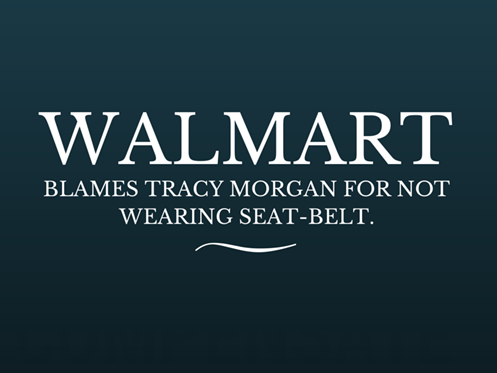 On Monday, Walmart delivered its answer in a New Jersey federal court to 30 Rock actor Tracy Morgan's lawsuit arising from a six-car accident on the New Jersey Turnpike. Among the defenses alleged, Walmart says that injuries "were caused, in whole or in part, by plaintiffs' failure to properly wear an appropriate available seatbelt restraint device."

Of course. It is the standard defense. Accept no responsibility. Blame the victim.

Mr. Morgan’s lawsuit alleges that Walmart driver Kevin Roper was fatigued at the time of the crash.  The facts show that Roper had commuted 700 miles from his home in Jonesboro, Ga., to a Walmart facility in Smyrna, Del., before beginning his shift.

The lawsuit alleges that "Walmart knew or should have known" that Roper had been "awake for more than 24 consecutive hours" ahead of the crash.

In its filed answer, Walmart wouldn't go into particulars about exactly what happened. (Of course not.)  The corporate giant says it has been designated by the National Transportation Safety Board as a party in an investigation of the accident. Walmart cites a part of transportation law as limiting the dissemination of investigative information.  (In reality, Walmart is just keeping quiet.)

"Accordingly, absent entry of a Protective Order and adequate protections by the Court to maintain the confidential nature of Wal-Mart's responses as required by the NTSB on-going investigation, Wal-Mart is unable to admit or deny" various allegations in the lawsuit.

Well, apparently this isn’t exactly true.  They can admit that Mr. Morgan was at fault for not wearing his seatbelt.  They can blame the victim.  Of course that is what happened.  Mr. Morgan’s failure to wear his seat belt drew the fatigued Walmart driver toward his vehicle.  The Walmart driver was powerless to avoid the magnetic force created by the lack of a safety restraint in place for Mr. Morgan.  An act of God or the powers of the universe, perhaps?

"By failing to exercise ordinary care in making use of available seatbelts, upon information and belief, plaintiffs acted unreasonably and in disregard of plaintiffs' own best interests," states Walmart's answer.  Walmart also looks to defend itself by disputing a basis for the negligence claim; disputing that actions were proximately caused by the company and its agents; disputing that Walmart had any control over third parties who may have caused damages; and disputing that it owed any duty to the plaintiffs.

How many stores does Walmart have?  How many employees?  They are a corporate GIANT.

One would hope that being a corporate giant also carrier with it a sense of responsibility.

RESPONSIBILITY.  That is what we teach our kids, to raise them to be responsible adults and members of society.

Did the executives at Walmart miss that lesson?  They “can neither admit nor deny anything” and they “blame the victim”?

This is what the courts and juries are for:  To compel the lesson of responsibility on those who refuse to act like grownups.