ADOT: 2015 was deadliest on Arizona roads in 7 years

2015 was the deadliest year for motorists on Arizona roadways in at least seven years, according to data released Friday by the Arizona Department of Transportation.

Speeding, impaired driving and failure to wear a seat belt were factors in more than a third of collisions that resulted in 891 deaths from January through September 2015.

The death toll in the first nine months of the year outpaced all of 2014, when a total of 773 crash-related deaths were reported.

ADOT is still collecting traffic data from across the state and will have complete statistics for 2015 available in its annual Arizona Motor Vehicle Crash Facts report, to be released later this year.

By the time all 12 months are calculated, the number of motor-vehicle related deaths is expected to be “super high,” Arizona Governor’s Office of Highway Safety Director said.

“The message we’re sending by sharing news of the 2015 increase based on preliminary data is this:

Drivers hold the keys to highway safety.  If more people buckle up, slow down and avoid driving while impaired, the number of crash fatalities will be dramatically reduced.

Other possible reasons for the increase?  Let’s not rule out some of the dangerous roads in Arizona.  ADOT does not always put their resources where they are most needed.

Example:  Interstate 10 has seen 75-100 deaths in the last 15 years due to cross-median collisions.  ADOT’s response:  None.

Arizona juries have awarded families no less than $55 million is verdicts against ADOT for these accidents.  ADOT’s response:  Do nothing.

Most recent electronic billboard seen on the highways: When ADOT actually takes some real measures to protect drivers and their families on Interstate 10, this sign will mean something.

Until then, don’t believe it.

Arizona might become one of the last states in America to pass a law that makes illegal texting and driving.

Sen. Steve Farley represents Arizona’s 9th District in the Tucson area. This is his 10th year submitting a bill against texting and driving.

“This new law really puts a disincentive in the driver's head,” Farley said. “If you know that if you pick up your phone and decide to return that text, you could become a hard-time prisoner.”

The new approach does not actually ban texting and driving. It makes harsh consequences for people who hurt somebody because of texting, similar to committing a crime using a gun.

State troopers are already writing tickets for texting and driving on Arizona highways.  (Really??  Where is this happening??)

“The speeding law currently says that you can't drive at a speed that is neither reasonable nor prudent,” Farley said. “And the speed at which it's reasonable or prudent to drive while texting is zero.”

Farley said Arizona and Montana are the only states that do not ban texting and driving, and Montana does not have a legislative session this year. National advocates will be focusing all their attention on Arizona.

“These aren't lobbyists. These are victims’ families,” Farley said. “I've had a lot of victims' families in my office over the years, including the latest ones, the family of Officer Tim Huffman, the DPS officer who was killed in Yuma.”

Advocates for Highway and Auto Safety just released a report that rates Arizona one of the most dangerous states in the country because of its lack of laws.

Saturday night, Biggs had not yet replied to an email for a comment on this report, but likely, he will.  With the same absurd response as in years past.

“Too many laws on the books”, says Biggs repeatedly.  One more meaningful law that will truly have an impact is too much for Sen. Biggs.

There is no doubt that this law, if passed, will save Arizona lives.  Is there any law more important than that?

Posted at 08:19 AM in Accidents in the News, Arizona Legislation, Automobile Accidents | Permalink | Comments (0)

Is Distracted Driving To Blame For 9% Increase In U.S. Traffic Deaths?

Getting in a vehicle today to get from point A to point B?  Realize this:  We are currently in the midst of an uptick in vehicle-related deaths, so it's never been more important to be cautious and keep your eyes on other drivers.

This past week, the National Highway Traffic Safety Administration released a report that sums up the first nine months of 2015 in traffic deaths, and the trend is a little disconcerting. It's found that in the first three-quarters between 2014 and 2015, the number of deaths rose 9.3%, and in particular, the growth in the third quarter alone (versus the previous third quarter) is 11.3%.

The NHTSA isn't giving explicit reasons for the increase (because it can't, at this point in time), but most people wouldn't find it surprising to learn that simple distractions are playing a big role. "Simple" distractions could include looking at or talking on the phone, or simply not paying enough attention to driving.

The economy can also factor into this. Gas prices as of late have been quite good all over the country, and that of course means that people are driving more, increasing their chances of getting into an accident. In terms of deaths per 100 million vehicle miles traveled (VMT), the first three quarters of 2015 recorded 1.10, which compared to a decade prior is actually quite an improvement. In 2012, deaths per 100 million VMT was found to be 1.14; in 2005, that number was 1.43.

As our vehicles continue to become safer with each generation, seeing an uptick in fatalities can help prove that even more needs to be done - perhaps not to the vehicles themselves, but instead with stricter safety laws. This kind of report of course gives credence to autonomous vehicles as well. In time, once such vehicles begin to litter our roads, it will be very interesting to see how these results are affected.

Posted at 07:16 AM in Accidents in the News, Arizona Legislation, Automobile Accidents | Permalink | Comments (0)

What happens if you're injured due to someone's road rage? What rights do you have?

Shots fired in road-rage incident on Loop 101 in Scottsdale

Two bullet holes were discovered in a Jeep Wrangler after gunshots were fired from another vehicle on Loop 101 near Scottsdale, according to the Arizona Department of Public Safety.

DPS Capt. Damon Cecil called it a road-rage incident that occurred when a car prevented the Jeep from passing.

The driver of the car shot three to four rounds once the Jeep passed, Cecil said.

One bullet hit underneath the passenger door handle, and another struck the right rear tire. A third bullet possibly hit the car, but DPS had not fully completed its forensics investigation.

The incident took place about 6:25 a.m. Monday on the northbound Loop 101 freeway just north of the Loop 202 interchange.

The driver reporting the incident moved off the freeway. No injuries were reported.

Investigators are looking for a burnt orange or maroon boxy-type car, perhaps a Honda Element.

WHAT HAPPENS IF YOU ARE INJURED BY A STRAY BULLET DUE TO A ROAD RAGE INCIDENT? DO YOU HAVE RECOURSE? IF SO, WHAT IS IT?

Question:  Will insurance pay for a road-rage incident?

On another hand, they may not; road-rage often involves an accelerated increase in emotion that renders a person to act in a manner premised solely upon those emotions, as opposed to any rational thought.

“Intentional acts” insinuate intentional thought and conduct, not a “heat of the moment” response.  Every case is different, and each needs to be evaluated on its own facts.

If you are a victim of one of these incidents and have sustained injury, looking for an experienced Arizona attorney who understands the difference and can advise you regarding your rights.

TOO LITTLE, TOO LATE; OTHERWISE, A WEAK RESPONSE

There’s no guessing that Arizona’s most dangerous highway is Interstate 10 between Phoenix and Tucson.

Need proof? There have been upwards of 60-70 deaths from cross-median collisions between Phoenix and Tucson over the last 15 years.

Moreover, a previous State of Arizona study tracked 104 cross-median accidents where a barrier was in place.  The State found that the barriers redirected the errant vehicles in 103 of them.

Did you know that it would cost approximately only $7 million for the entire stretch of the I-10 between Phoenix and Tucson to have barriers put in place?  To save 70 lives, that is not a high price.

It sounds like a lot, but what if we told you that ADOT has a $300 million budget PER YEAR…

What’s their excuse?  Answer: they have none.

In February 2012, a jury awarded a family $7.8 million for the State’s negligence in failing to have median barriers in place on Interstate 10.

In December 2015, a jury awarded two families a total of $47 million for the same reason.

The State has finally responded.  Effective December 2015 AFTER the most recent jury verdict, ADOT is going to put signs up on Interstate 10: 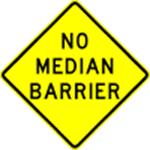 This is Arizona’s response to 70 deaths on Interstate 10.  No median barriers.  No additional studies.  No safety experts hired to design a better roadway.

If you have to drive Interstate 10 between Phoenix and Tucson, please, be careful.

Posted at 07:12 AM in Accidents in the News, Arizona Legislation | Permalink | Comments (0)