Interstate 40: Another fatal cross-over collision. Why is there still no fix?

A collision closed the eastbound lanes of Interstate 40 at Twin Arrows, east of Flagstaff, on Tuesday afternoon, according to the Arizona Department of Transportation.

A sedan crossed the median a struck a semi truck head-on.  One person was killed in the sedan.

The incident is at milepost 222.

We have seen far too many cross-median crashes in Arizona.  These have got to stop.

ADOT is Arizona's highway department. ADOT knows that cross-median crashes are a problem, resulting in many deaths over the years.

There is a simple fix.  ADOT knows it. Their experts know it. But they continue to ignore it.

Posted at 08:27 AM in Accidents in the News, Arizona Legislation, Automobile Accidents | Permalink | Comments (0)

Traffic deaths rise in first half of 2016: What's going on?

Traffic fatalities were up 9% in the first six months of 2016, compared with the same period last year, continuing a surge in deaths that began two years ago as the economy improved and travel picked up, according to information released by the National Safety Council.

An estimated 19,100 people were killed on U.S. roads from January through June. That's 18%  more than two years ago at the six-month mark. About 2.2 million people also were seriously injured in the first half of this year.

The council estimates the cost of these deaths and injuries:  $205 billion.

At that rate, annual deaths could exceed 40,000 fatalities this year for the first time in many years. More than 35,000 people were killed on U.S. roads last year, making it the deadliest driving year since 2008, when more than 37,000 were killed.

Our complacency is killing us. Americans should demand change to prioritize safety actions and protect ourselves from one of the leading causes of preventable death.

While many factors likely contributed to the fatality increase, a stronger economy. Lower gas prices and lower unemployment rates are likely at the core of the trend.  More people are driving more often.

Historical data show that after peaking in the 1970s, traffic deaths have generally trended downward, according to the Insurance Institute for Highway Safety. Large dips in deaths have corresponded to shocks to the economy — the oil embargo of the mid-1970s, the recessions of the early 1980s and early 1990s and the more recent downturn that began in late 2007 with the subprime mortgage crisis.

During the Great Recession triggered by the housing crisis, the number of miles Americans put on the road each year plunged and fatalities dropped to levels not seen since Harry Truman was president.

COMMENT: More people are on the roads, more cars are on the roads and therefore more potential exists for crashes.  We have to add to the mix is that there are ever-increasing distractions for these drivers (cell phones, tablets and the electronic “fun stuff” in all cars).

We all have to be more alert, more attentive and more careful. We cannot control others on the road—we can only control ourselves.  But, understanding that a problem exists is the first step in correcting it.

Likely, there is not one single person on the road who was not taught the principles of “defensive driving”.  That will not prevent all accidents, but it can prevent many.

Again, we cannot control what others do behind the wheel—only what we do.  Stay safe everyone.

Posted at 09:36 AM in Accidents in the News, Arizona Legislation, Automobile Accidents | Permalink | Comments (0)

What are the car seat laws in Arizona?

Car seats are vital in order to keep your children safe while in a vehicle. It is equally important to use the seat correctly and safely as it is to have the seat in the first place.

When you get a car seat, please make sure that you read the entire instruction manual.

Not only will you know what exactly you need to do, but it will also give you peace of mind.

What are the laws regarding car seats in Arizona?

Under Arizona Law: Children younger than 8 years old or less than 4 feet 9 inches tall are required to sit in a proper child safety seat when riding in a vehicle.

Arizona does not have a provision regarding when of the child. Only height. 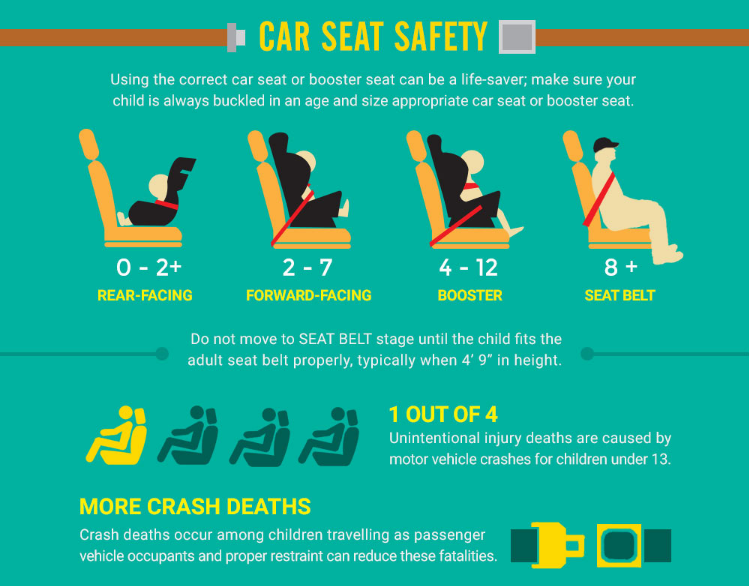 Woman hit by car and critically injured in North Phoenix

Phoenix police say a woman is in extremely critical condition after being struck by a car Friday night. A Phoenix Fire Department spokeswoman said the victim is 48 years old.

The woman was hit in the intersection of 12th Street and Northern Avenue in north-central Phoenix, according to Officer James Holmes, a Phoenix police spokesman.

The intersection was closed in all directions as of 9 p.m. and was expected to stay closed well into the night.

We still don't know the circumstances here. Driver impairment? Dark clothing? There are so many details here to know, and the legal issues are extensive.

Our prayers to those involved.

Phoenix, Arizona car accident caused by distracted driving: Why is there still no statewide ban?

Distracted driving may have caused rear-end collision in Phoenix Three people were taken to a hospital after an overnight crash that police believe was caused by a distracted driver.

Phoenix police said a Hyundai was stopped at a red light at 40th Street and Indian School Road when a Honda came up and hit it from behind, propelling it across the street.

The driver had to be extricated from the Hyundai. The passenger is in serious condition.

Cell phone use? Likely. Did you know that Arizona is one of the few states left that does not have a distracted driving law?

Our legislators have declined to pass one, saying “there are already too many laws on the books”.

My response: Well then get some of the stupid ones off the books, and PASS A LAW THAT BANS DISTRACTED DRIVING!!!!

Posted at 08:32 AM in Accidents in the News, Arizona Legislation, Automobile Accidents | Permalink | Comments (0)

Roadway fatalities are soaring at a rate not seen in 50 years, resulting from crashes, collisions and other incidents caused by drivers.

The industry experts agree:  We should no longer refer to these as “accidents”.

That is also the position of safety advocates, including grassroots groups, federal officials and state and local leaders across the country. They are campaigning to change a 100-year-old mentality that they say trivializes the single most common cause of traffic incidents:  Human error.

When you use the word ‘accident,’ it’s like no one is at fault, and perhaps ‘God made it happen.’  But clearly that is not the case.  Almost all crashes stem from bad driver behavior like drinking, distracted driving and other risky activity. Only about 6 percent are caused by vehicle malfunctions, weather and other factors.  Preliminary estimates by the nonprofit National Safety Council show deadly crashes rose by nearly 8 percent in 2015 over the previous year, killing about 38,000 people.

A growing chorus of advocates say that the persistence of crashes — driving is the most dangerous activity for most people — can be explained in part by widespread apathy toward the issue.

Changing semantics is meant to shake people, particularly policymakers, out of the implicit “nobody’s-fault” attitude that the word accident conveys.  On Jan. 1, the state of Nevada enacted a law, passed almost unanimously in

the Legislature, to change “accident” to “crash” in dozens of instances where the word is mentioned in state laws, like those covering police and insurance reports.  New York City adopted a policy in 2014 to reduce fatalities that states the city “must no longer regard traffic crashes as mere ‘accidents,’ ” and other cities, including San Francisco, have taken the same step.

Indeed, at least 28 state departments of transportation have moved away from the term “accident” when referring to roadway incidents. The traffic safety administration changed its own policy in 1997, but has recently become more vocal about the issue.  In April, The Associated Press announced a new policy:  When negligence is claimed or proven in a crash, reporters should avoid the word “accident”, which can be read by some as a term exonerating the person responsible.”

The experts now agree:  “Accident” is simply the wrong word.  Merriam-Webster defines accident as “an unexpected happening” that “is not due to any fault or misconduct on the part of the person injured.”  The word was introduced into the lexicon of manufacturing and other industries in the early 1900s, when companies were looking to protect themselves from the costs of caring for workers who were injured on the job, according to a historian.  The business community even developed a cartoon character — the foolish Otto Nobetter, who suffered frequent accidents that left him maimed, immolated, crushed and even blown up. The character was meant to warn workers about the risks of inattention.  “Relentless safety campaigns started calling these events ‘accidents,’ which excused the employer of responsibility.”

When traffic deaths spiked in the 1920s, a consortium of auto-industry interests, including insurers, borrowed the word to shift the focus away from the cars themselves.  Automakers were very interested in blaming reckless drivers, but over time the word has come to exonerate the driver too, with “accident” seeming like a lightning strike, beyond anyone’s control.  These days, the pressure to change the language stems partly from aggrieved families using social media like Facebook clubs and Twitter to lobby for change.  Safety advocates often post Twitter messages to journalists and policymakers, urging them to stop using “accident” to describe a crash.

When New York City changed its policy in 2014, it did so partly in response to such grass-roots efforts, including from a group called Families for Safe Streets.  The group is led by parents whose children have been seriously injured or killed in automobile crashes.  The groups has helped start a campaign called “Crash Not Accident,”; the purpose is that the drivers in deadly wrecks should not be given the presumption of innocence just because they have lived to tell their side of the story.

PLEASE FEEL FREE TO SHARE YOUR THOUGHTS WITH US ON THIS TOPIC.

Posted at 10:40 AM in Accidents in the News, Arizona Legislation, Automobile Accidents | Permalink | Comments (0)