What is my role in a personal injury lawsuit? What do I have to do, if anything? 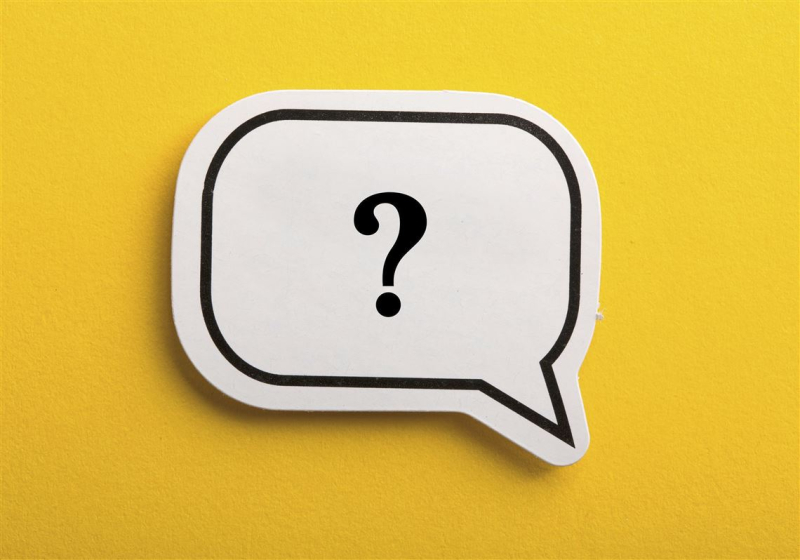 You have been involved in a motor vehicle accident, and you have done right to hire a litigation/trial attorney. Despite these right decisions, the insurance company for the at-fault driver still does not want to pay you what is fair. The next step is to file a lawsuit. What will be required of you?

As long as you have hired the right attorney and law firm, they will do all the heavy lifting. You may have to fill out some paperwork and respond to some written questions(called “interrogatories”), depending on the nature of your injuries you may be required to be examined by a physician hired by the defense and you likely will have to sit for a deposition (a meeting where the other side’s attorney gets to ask you questions about your claim), but other than that, not much should be required of you. This is why it is so important to find the right attorney and law firm, and to make sure they are not only experienced in personal injury, but are truly a litigation law firm.  At Zachar Law Firm, we file lawsuits and we fight for our clients, and have been doing it for many years.

David Catanese has 30 years of trial experience in as a Certified Specialist and Personal Injury and Wrongful Death.

Christopher Zachar has 27 years of trial experience and is a Certified Specialist and Personal Injury and Wrongful Death.

Ben Jemsek has been litigating personal injury cases for more than 20 years.

At Zachar Law Firm, personal injury cases, including litigation and trial if necessary, is what we do – indeed, it’s all we do.

Have a question regarding your case? Please feel free to call us for a free, no obligation personal consultation.

How do I pay my medical bills until I get my personal injury settlement? 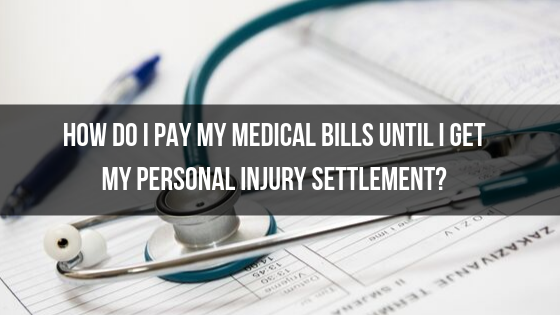 If you have been in an accident, sustained injuries and require medical care, there is always a concern as to how the medical bills will be paid.

Generally, we are able to work with your medical providers, to keep your accounts current and your credit good until the case gets settled. Most medical providers understand that accidents happen and that people are not able to pay for medical care right away.

Communication is very important here, and Zachar Law Firm communicates directly with your medical providers to make sure they understand that we are involved and that we will see to it that they get paid when the case settles.

This is one of the benefits of hiring an experienced and dedicated personal injury law firm. We know how to handle these cases and we know how to work with medical providers. The last thing you need after an accident is people hounding you for payment of bills that you do not have the money to pay.

You need to focus on getting your medical care and getting better. Let Zachar Law Firm do the rest.

What is a release in a personal injury settlement? 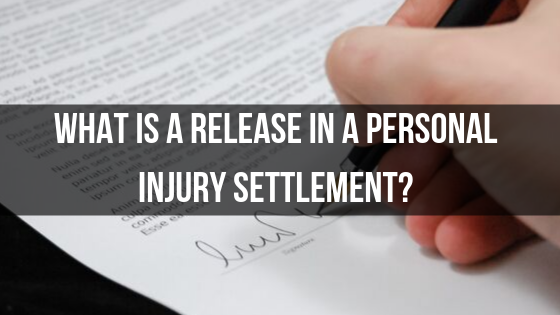 A Release is a form that we use when a personal injury case is settled.  In exchange for paying money, the insurance company wants assurance that the case is over for good and will not be brought up again.  Releases can be short or long, but all essentially say the same thing:

“In exchange for X dollars, the claimant agrees that this case is over forever.”

It is important to make sure you and your attorney are aware of all of your claims and damages, and a discussion held regarding the settlement.  Also, some insurance companies will try to get to you very soon after an accident, to entice you with money in exchange for your signature on a Release.   You should always seek the advice of an experienced injury attorney before signing anything like this.  If you sign—no matter how serious you find out your injuries to be later, your case may be over.  Forever.

A Release can be confusing and difficult to understand. At Zachar Law Firm, we are very familiar with Releases, how they operate, when to sign them and whether or not you are agreeing to a fair settlement.

Never sign this document without consulting with an experienced personal injury lawyer!

MAKE NO MISTAKE:  INTERSTATE 10 IS A DANGEROUS HIGHWAY 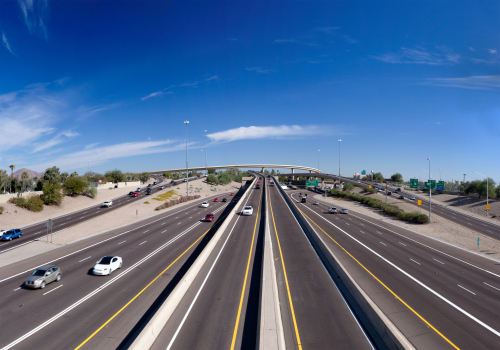 Arizona has one of the top five most dangerous highways in America during summer months, a recent study found.

ASecureLife.com listed the most dangerous highways in each state between May through September from 2015 to 2017.  Interstate 10, which runs for 329 miles in Arizona, had 100 fatalities during that study period.

All of the data that was collected in the study comes from the National Highway Traffic Safety Administration’s Fatality Analysis Reporting System.

The next two deadliest highways in Arizona during summer months between 2015 and 2017 were I-40 with 51 fatalities and I-17 with 49 fatalities, according to the study.

The Arizona Department of Transportation has responded, poo-pooing the result.

"Fatalities alone shouldn’t be the sole indicator of a roadway’s safety performance," it said. "You need to look at variables including traffic volume, as I-10 is the state's longest and most-traveled freeway, with much of it passing through the state's largest metropolitan areas."

While correct, it is important to know that the study only counted fatalities; had it counted accidents, the number would be in the tens of thousands, so, ADOT likely misses the mark here.

The Arizona Department of Public Safety had no comment on the study (Note:  They are the agency that has to tend to and clean up the wrecks that occur on Interstate 10).

The Message:  PLEASE be careful when traveling Interstate 10.  There is little doubt that it is one of the most dangerous highways in America.

What is the statute of limitations for filing a wrongful death claim? Do I have enough time? What should I know? 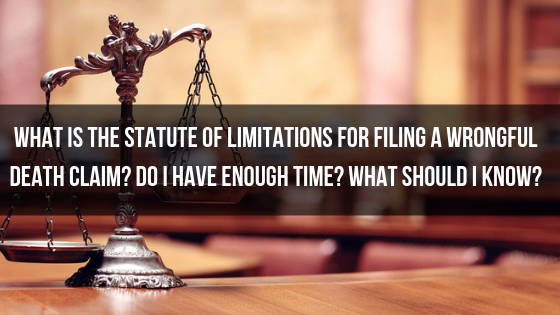 Wrongful death claims, while sharing the general 2-year statute with other personal injury claims, is actually quite different than other personal injury claims.  When a person dies, the decedent essentially loses his or her claim.  However, the Arizona legislature enacted laws (statutes) that allow the claim to be prosecuted by either (1) decedent’s estate or (2) family members of the decedent, which the legislature has specifically listed in the statute or both.  The “survivors” as referenced in the statute, would be the family members of the decedent.  If an improper act caused the death of the family member, the claim must be pled and prosecuted under the wrongful death statutes.  As such, the statute itself defines the claim, when the claim must be filed, those that may make the claim and the remedies permitted.  Here is what Arizona’s wrongful death statute permits as it concerns claims by the surviving family members:

There is a specific jury instruction provided to juries to instruct the jury on the law on the type of damages they may award wrongful death beneficiaries.  It states as follows:

If you find [name of defendant] liable to [name of plaintiff], you must then decide the full amount of money that will reasonably and fairly compensate [name of each survivor] [separately] for each of the following elements of damages proved by the evidence to have resulted from the death of [name of decedent]. 1. The loss of love, affection, companionship, care, protection, and guidance since the death and in the future. 2. The pain, grief, sorrow, anguish, stress, shock, and mental suffering already experienced, and reasonably probable to be experienced in the future. 3. The income and services that have already been lost as a result of the death, and that are reasonably probable to be lost in the future. 4. The reasonable expenses of funeral and burial. 5. The reasonable expenses of necessary medical care and services for the injury that resulted in the death.

Emotional distress may be a consequence of losing one’s family member.  While not specifically referenced in the above-referenced jury instruction it would certainly fit within the description of damages set forth in the number 1 and specifically number 2 category listed in the instruction.

Remember, wrongful death law in Arizona can be extremely complex. Make sure you have the right law firm representing you, it will make all the difference in your case.

Wishing all a healthy and happy Labor Day holiday! 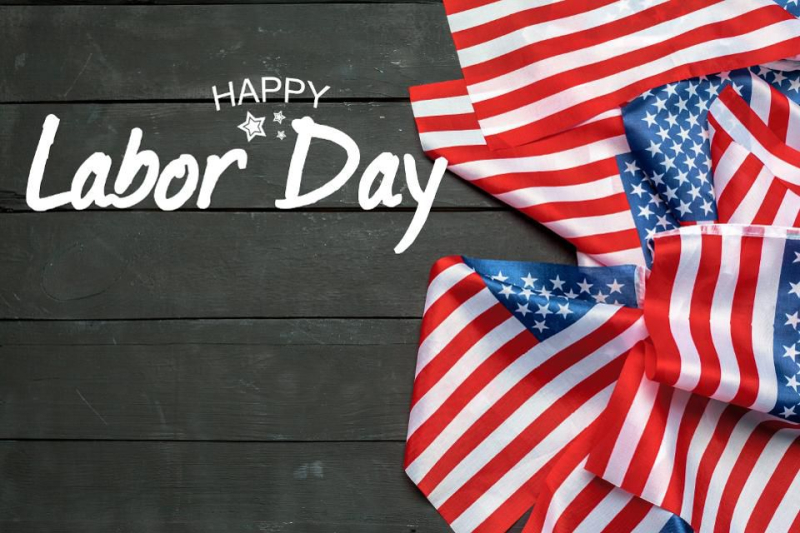 Wishing all a healthy and happy Labor Day holiday!  Some fun facts about Labor Day:

So, rest, relax, BBQ and enjoy the family on this 125th anniversary of Labor Day!!!