Keep you and your loved ones safe this Thanksgiving! Millions of Americans will be preparing meals and traveling over the Thanksgiving holiday, which has prompted the American Red Cross to remind everyone of the importance of safety this holiday season.

Cooking is the leading cause of home fires and Thanksgiving-related injuries.

• Keep children and pets at least three feet away from cooking areas.
• Constantly clean all cooking surfaces to prevent grease buildup.
• Stay in or close to the kitchen while frying, grilling or broiling food. Turn burners off if leaving the kitchen.
• Keep a pan lid or baking sheet nearby. Use it to cover the pan if it catches on fire.
• Place turkey deep fryers outside and far away from the house, deck, and garage.

Vehicles should be in good working order before heading out. Things to remember:

Check belts and hoses and make sure to secure all luggage attached to the vehicle.
• Buckle up, keep the speed limits and obey all traffic signs.
• Avoid distractions while driving like using mobile phones to talk or text.
• Designate a driver who won’t be drinking whenever alcohol is served.

ZACHAR LAW FIRM wishes everyone a safe and Happy Thanksgiving!!

If I signed a waiver, do I still have a chance at bringing a personal injury claim? 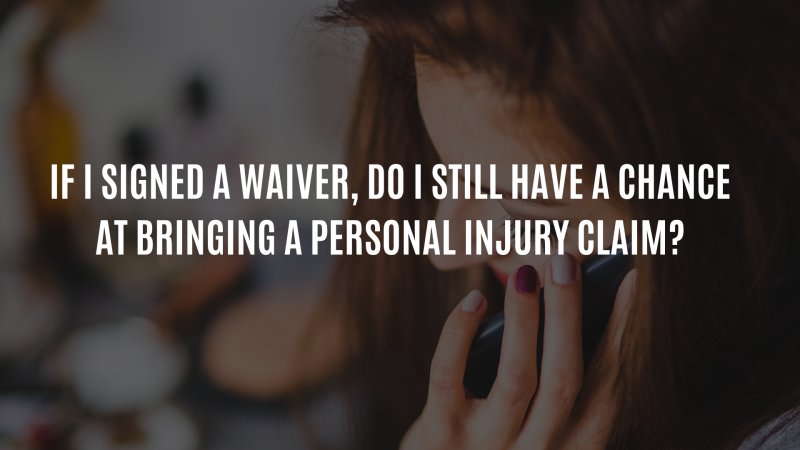 It is common that when you participate in some activities, businesses may have you sign a waiver or “release of liability”  in order to participate.  These are usually signed for physical activities such as snow skiing, bowling, marathons and most commonly, your child’s school field trip.

These waivers or releases are designed to protect the businesses and/or schools from legal liability for any injury, a participant suffers, even when these injuries are caused by the business’ or school’s negligence.

Signing a waiver does not prevent you from recovering damages if an injury occurs. A release or waiver may make the claim more challenging, whether the release or waiver holds up as a defense, is a legal question left for the courts to decide.

The Courts will assess if the release language was understandable; was the injury caused by the exact activity the release was prepared for; does the release violate some public policy?   These issues can be confusing and an understanding of Arizona law is critical to whether the waiver or release will affect your claim.

At Zachar Law Firm, we have attorneys, each with over 20 years of experience, who will be able to look at your case, the waiver or release you signed, and advise you whether or not the waiver affects your claims. Have a question? Feel free to reach out to us: 602-494-4800. Or visit us online at https://zacharassociates.com.

Is it wise to talk to the at-fault driver’s insurance company after I’ve been in a wreck? What should I say? 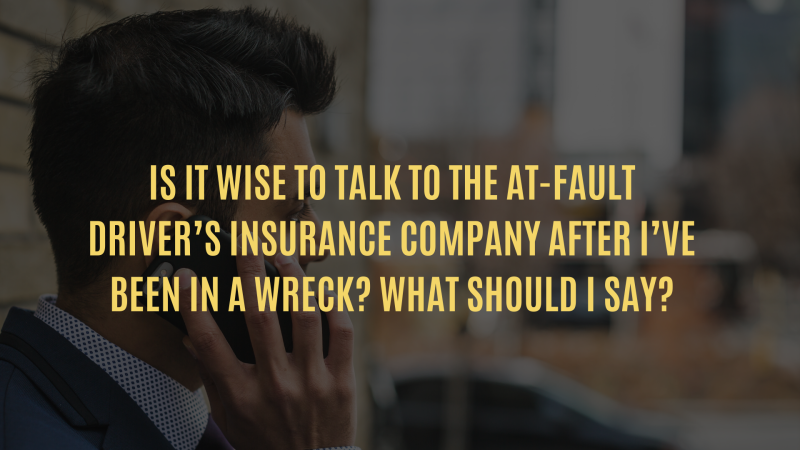 If you have been in an injury-causing incident or accident, one of the worst things you can possibly do is speak to the other side‘s insurance adjuster on your own, without an attorney on your side.

The other side insurance company has two goals in mind in every case:

They will do everything they can to achieve either of these goals and the information they gather from you directly, absent an attorney, can only help them achieve one of these two goals.

Zachar Law Firm has been in the business of helping personal injury victims in Arizona for more than 27 years. One of the most important things we do when we get involved in a case is to create a barrier between you and the other side’s insurance company – so they cannot talk to you directly and they cannot obtain information which they will then use against you later.

Questions regarding your personal injury case?  Call us anytime for a no-hassle, free consultation

How long does a personal injury claims process in a car accident case usually take? 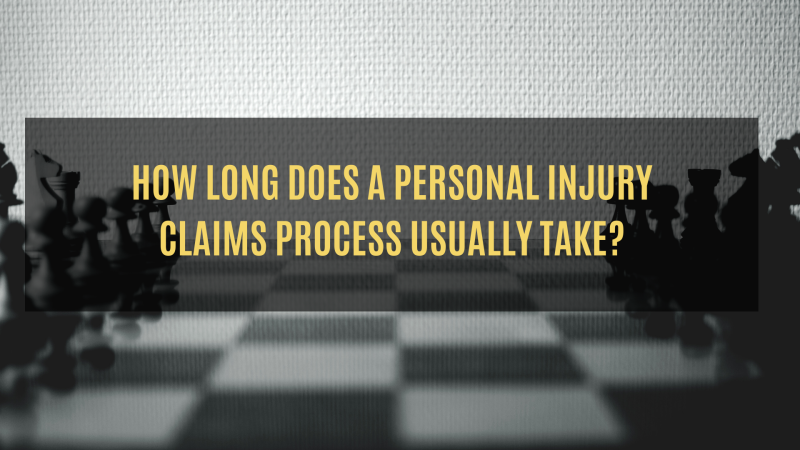 How long a claims process for a car accident in Phoenix, Arizona will last is dependent on a number of variables including but not limited to the following:  (1) extent and duration of your injuries; (2) whether you ultimately agree to the amount being offered or (3) whether the at-fault insurer agrees to the amount you are offering.  While each case has a different time variable, all cases can be viewed in terms of duration by a singularly specific event:  filing a Complaint.   This event divides the case in terms of duration.  Before filing a lawsuit (Complaint), the case is considered to be in “pre-litigation” which is what most people consider the “claims process” as set forth in this question.

After filing the lawsuit, the case is considered to be in “litigation.” The distinction between pre-litigation and litigation provides a generic timeline for the case.  Before filing a lawsuit, there is no set time frame for resolving a case.  The only deadline for any case is a statute of limitations and that deadline only provides for the time a lawsuit must be filed.  It does not provide a deadline for resolving a case.  Thus, if the case is in pre-litigation, the time frame for resolving it is entirely dependent upon both sides (plaintiff and defendant) on agreeing to a settlement amount.  There is no deadline for this and the time it takes to resolve the matter before filing a lawsuit is entirely dependent on the parties’ agreement to do so.  There is no impetus or rule for either side to do so by any set deadline (other than the deadline to file the claim- which is on the plaintiff to do).

After filing a lawsuit, the court imposes some general deadlines that provide a general perspective on when a case in litigation should theoretically resolve.  The Arizona Supreme Court implemented new scheduling rules that took effect on July 1, 2018.  One of the reasons these rules were created was to alleviate the usually slow resolution of cases, specifically to implement rules for different types of cases, primarily dependent on the financial value of the case (though not entirely).  While these rules were implemented for several reasons, the primary reason was to differentiate between low-value cases and high-value cases and more importantly, the amount of time and resources needed to resolve these different cases.  One effect of these rules was to shorten the resolution times of the cases based on the inherent value of the cases.  The courts would now instruct the parties to treat the litigation process in accordance with the initial determination of the value of the case.  Discovery, which is the process of obtaining and producing evidence during the course of litigation, would now be limited based on the initial determination of the value of the case.  Thus, discovery, which would often last months and years in cases, are now theoretically constrained to presumptive time limits.  Discovery for Tier 1 cases (cases valued at $50,000 or less) should be completed within 120 days of the parties engaging in an early meeting.  Early meetings are to be conducted within 30 days of a defendant filing an Answer to the Complaint (which must be done within 20 days of being served the Complaint).  Discovery in Tier 2 cases (More than $50,000  to $300,000) should be completed within 180 days of the early meeting.  Discovery in Tier 3 cases (more than $300,000) should be completed within 240 days of the early meeting.  While these deadlines certainly do not require the case to be completed by the dates set forth for each tier, it does give the parties some idea of when the case should be resolved.   Only cases in litigation provide some indication of when a case should be done, but even then, nobody can accurately inform a client when their particular case will resolve.  More importantly, settlements are agreements to resolve a case between both a plaintiff and a defendant, and settlements can be accomplished anytime- before, during or after a case is litigated.  A case can resolve anytime, provided both sides agree to it.  This type of resolution has no timeline.  Once filed, a case, depending on the tier, has a theoretical timeline of approximately 120 days, 180 days and 240 days (for discovery).  This means the case will not likely last longer than approximately 2-6 months from the time discovery ends.  Again, even these deadlines are theoretical because setting a trial date after discovery is entirely dependent on not only the parties’ and their attorneys’ schedules but on the court’s schedule.

Personal injury law can be extremely complex as there are many variables that are involved. Not only is it important to retain the right law firm, but it's critical that the law firm knows how to handle these matters to the fullest extent. If you have a question regarding a personal injury claim in Phoenix, Arizona, please feel free to reach out to us at 602-494-4800. Or, you may also visit us online at https://zacharassociates.com.

Can the at-fault driver's insurance company deny or delay my personal injury claim? 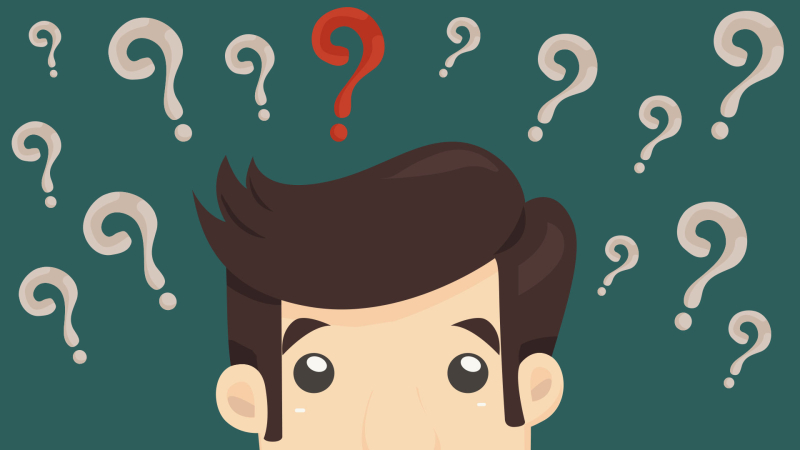 If you find yourself a victim of a motor vehicle accident, then you also likely find yourself in the position of having to deal with the other driver's insurance company.

Please understand that the other driver's insurance company has one of two goals in mind:

They are in the business and have been at this for years. This may be your first accident.  Do you know what to say? Do you know what not to say? In dealing with the other side’s insurance company on your own, you are in unknown and somewhat dangerous territory.

Delaying or denying your claim is a favorite tactic of insurance companies.  So, what can you do? Look for an experienced personal injury law firm that has your best interest in mind. To make sure you have the right attorney and right law firm, find an attorney who is a Certified Specialist in Personal Injury and Wrongful Death, and therefore, a known successful trial attorney.