Metro light rail has been running for more than three years now. And just-released information points to some locations that get more crashes than others.

Since 2009, there have been 118 light rail accidents in arizona, mostly in the downtown Tempe and Phoenix areas - which makes sense since they're probably the busiest. But there's some other things we've uncovered that may make you think twice the next time you try and beat that train.

"With every incident it triggers us to think about what occurred, why it occurred, are there things we can be doing better," said Hilary Foose, spokeswoman for Valley Metro Light Rail. They have found out there are some things they can do - take First Avenue and Washington Street and Apache Road and Price Road, for example. These two intersections have seen the most crashes, with seven each since 2009.

"Those two areas are areas that are busy with traffic anyway," Foose said. She added they post PSAs and tweak traffic signals if they see a lot of crashes at one particular place. The numbers suggest it may be working; First Avenue and Washington Street saw five crashes in 2009, and none so far in 2012.

But the problem is that too many drivers are making illegal turns in front of the light rail. Pedestrians test their luck, too.

"People just jolting across, not only light rail the trackways itself but three lanes of oncoming automobile traffic," Foose said. 2010 saw two pedestrian accidents, and there's already been that many so far in 2012.

Foose said trains come every 12 minutes, so it's really not worth it to try and beat it.

"When you are sharing the road with a very large vehicle and it takes it a very long time to stop you have to be so much more mindful of the signals and being very aware," she said.

All the injuries in these crashes have been pretty minor, but one pedestrian accident did go to the hospital with some broken ribs. The scary thing we found, though, is since 2009, 22 drivers have bailed from the scene of a crash with light rail - that's almost 19 percent.

The best thing to always do when you are around the Light Rail area, is to make sure you are always aware of your sorroundings and never make bad choices in challengeing the Light Rail in anyway. Think smart and act smart. 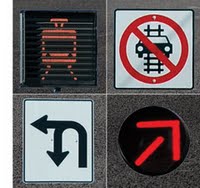 Early Wednesday morning, a Valley metro bus and a light-rail train collided at First Avenue and Washington Street. Eight people were taken to the hospital for injuries.

According to Metro spokeswoman Marty McNeil, video footage showed that the bus driver had a red turn arrow which he/she failed to consider. The bus tried to make a right turn onto Washington from First Avenue and collided with the train, which was approaching Washington on the right side of the bus. The circumstances remain under investigation.

However, if the bus driver did fail to stop at a right turn arrow, and this was a cause of the collision, then obviously he/she was at fault. Amid all of the recent discussions regarding the light-rail and it’s poor management and treatment of operators this accident makes me wonder if our Valley bus drivers ever received any instruction on sharing the roads with the light-rail. Considering we have now had 22 accidents involving the light-rail, wouldn’t it be prudent by now to have made sure that at least city bus driver have had new instruction on how to incorporate the trains safely into their routes? I am hoping this is a rhetorical question.

This also leads me to further ponder whether or not any mention of the light-rail has been incorporated into the Motor Vehicle Department’s driver’s license manuals. Shouldn’t new drivers learn about the light-rail before receiving their driver’s license? It clearly is not going away anytime soon. However, for those of us who already have an Arizona drivers license I did find an informative page at www.valleymetro.org if you click on METRO Light Rail under other services.

All of this aside, according to the Metro, none of the previous 21 accidents have been their driver’s fault. If the reports I have seen so far are correct, then they are not at fault in this accident either.

We know the light rail is going to take some adjustment time for all. If you travel in the area, please be careful. Injury accidents are best if avoided altogether. Thus far I don’t recall any serious injuries. Sooner or later, one will certainly occur. Who is at fault will have little meaning to the injured or their family. Let’s all keep this in mind, and all use a little more caution and observation when in the areas of the light rail.

If you have any questions or comments, please feel free to email Chris Zachar directly at Czachar@zacharlaw.com, or visit our website at ZacharAssociates.com .

Metro Light-Rail Collision By now all of you have heard about the accident two weeks ago with the light-rail train. Metro’s preliminary investigation showed that an electronic failure caused the arms at a Tempe crossing to rise even though a train was approaching. The train did collide with a truck but there were no serious injuries. This was the fourth accident for light-rail and the fifth has already occurred since then.

We all need to be even more vigilant with this new introduction on our roads. Not only do we have to adapt our driving to include the new lanes and crossings but we must also remember our defensive driving skills because sometimes it might just come down to “electronic failure”. Remember, there are no 2nd chances for an injured person, no matter what the circumstances. The best course of action is to drive defensively and keep a lookout for roadway hazards. This is the best way to avoid accidents and stay safe.

However, in the event an accident occurred by way of the malfunctioning of the light rail, or due to another circumstance involving the fault of a city, county or state, it is important to know that the time for bringing a claim for damages against the responsible governmental entity is considerably shorter than an accident with another vehicle. Should such an accident happen to you or a loved one, please do not hesitate or delay in seeking legal advice from an attorney experienced in this area of the law.

Chris Zachar is an experienced personal injury attorney in Phoenix, AZ. Call us for a Free Initial Consultation (602) 494-4800.